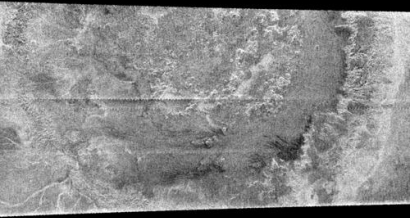 A huge annular feature with an outer diameter of approximately 440 kilometres appears in this image taken with Cassini's Titan radar mapper. It resembles a large crater or part of a ringed basin, either of which could be formed when a comet or asteroid tens of kilometres in size slammed into Titan. This is the first impact feature identified in radar images of Titan.

The surface of Titan appears to be very young compared to other Saturnian satellites. In Titan's case, debris raining down from the atmosphere or other geologic processes may mask or remove the craters. The pattern of brightness suggests that there is topography associated with this feature; for example, in the centre of the image there appear to be mounds each about 25 kilometres across. Since they are dark on their lower edges that face away from the radar and bright on the opposite face, they must be elevated above the surrounding terrain.

This image is a part of a larger swath acquired on 15 February 2005, on Cassini's second opportunity to map Titan's surface via radar. Seams between radar segments are visible as horizontal, saw-tooth-shaped lines.