A Clear View of Titan's Surface

A Clear View of Titan's Surface 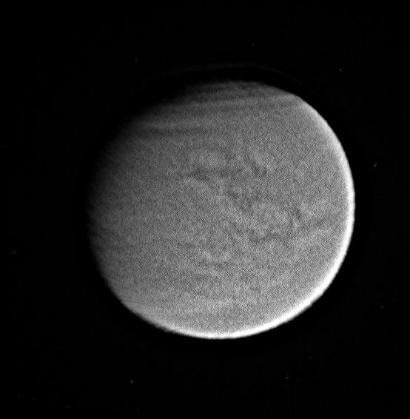 Titan's surface and atmospheric features are shown here in this processed, visible-light image taken by Cassini.

Cassini's visible-light spectral filter is sensitive to a broad range of light, from ultraviolet to near-infrared. Imaging scientists normally use a narrow-band filter centred at 938 nanometres to look at Titan's surface and cloud features. Most images of Titan taken between flybys are in visible light and are used to navigate the spacecraft. Views like these demonstrate that the surface, as well atmospheric features (such as the haze banding seen near the northern limb of Titan,) can indeed be seen through this filter.

Although the clear filter is not the best way to view the surface, this observation demonstrates that with sufficient processing, this filter can be used to keep track of cloud features during periods between flybys in order to provide a better understanding of the evolution of Titan's atmosphere as the moon nears spring in the northern hemisphere.

This image was taken with the Cassini spacecraft narrow angle camera on 10 February 2005 from a distance of 2.5 million kilometres. The image scale is 15 kilometres per pixel. The image was strongly enhanced to bring out surface features. Features on the eastern side of this image will be observed at 20 times this resolution during a flyby in late March.