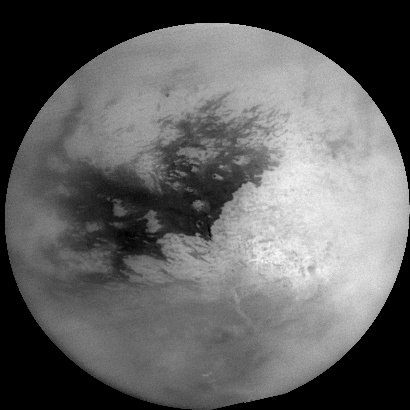 This mosaic of Titan's surface was made from 16 images. The individual images have been specially processed to remove effects of Titan's hazy atmosphere and to improve visibility of the surface near the terminator.

During Cassini's first close flyby of Titan in October 2004, many clouds were seen near the south pole; in the December flyby many clouds were seen at mid-latitudes. During this flyby, only a few small clouds near the south pole were noted. Imaging coverage during this flyby included improved looks at territory to the north and west of Xanadu, the large bright white area.

The images were taken with the Cassini spacecraft narrow angle camera through a filter sensitive to wavelengths of polarized infrared light and were acquired at distances ranging from approximately 226 000 to 242 000 kilometres from Titan. Resolution in the images is about 1.3 kilometres per pixel.