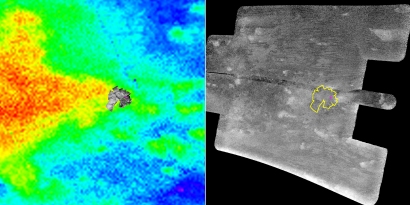 The Cassini spacecraft carried the European Space Agency's Huygens probe to Saturn and released it in December 2004. The probe landed on Titan 14 January 2005, acquiring a set of images using the descent imager/spectral radiometer camera as it parachuted to the surface.

As Cassini continued to orbit Saturn, its imaging science subsystem and visual and infrared mapping spectrometer mapped the region where the Huygens probe landed. On Friday, 28 October 2005, Cassini's radar instrument provided the highest resolution orbital data yet of this area.

The two images shown here tell the story. On the left, in colour, is a composite of the imaging camera and infrared data (red areas are brighter and blue areas are darker, as seen in infrared). On the right is the synthetic aperture radar image. The Huygens descent images are shown inset on the left image and outlined in yellow on the right. The magenta cross in both images shows the best estimate of the actual Huygens landing site. This is a preliminary result, based on the best information available at the present time.

In the left image, the brighter areas seen by the Huygens camera correspond to the large area depicted in red and yellow. On closer inspection, bright features within the Huygens mosaic seem to correspond to smaller features in the map composed of data from the visual and infrared spectrometer and imaging camera. On the right, the correspondence is less clear. In radar images bright features are usually rougher, so one would not necessarily expect an obvious connection.