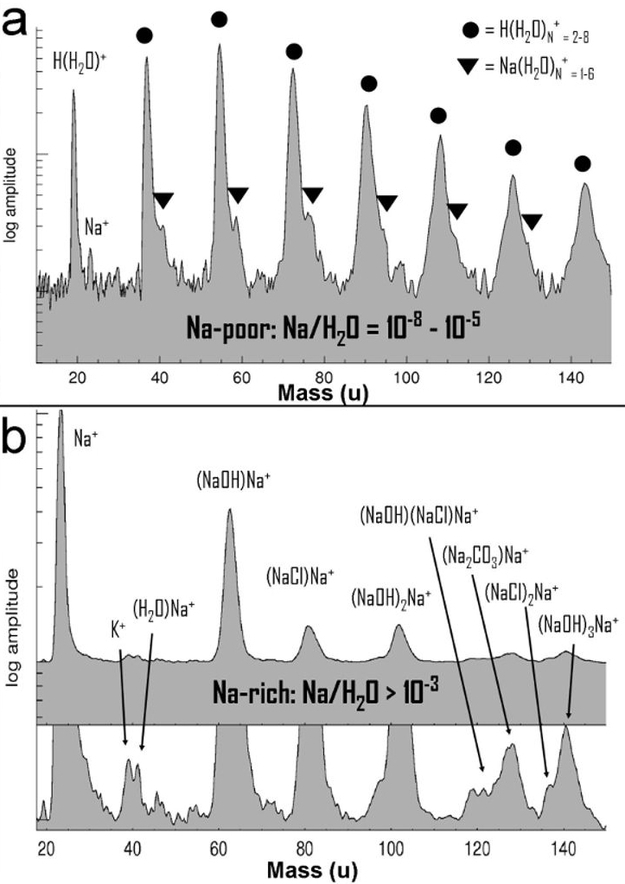 An example of a mass spectrum of type I (a) and type III (b) ice particles recorded by the Cosmic Dust Analyzer (CDA).

a: The mass spectrum of a Na-poor ice particle (type I and II) is dominated by a sequence of water cluster ions of the form H(H2O)n+, (n = 2-8). A weak Na+ mass line is also present. Within the water matrix of the impact cloud inside the instrument, some of the Na ions immediately form hydrates Na(H2O)n+. Since the sensitivity of the CDA detector to Na is at least several hundred times higher than to water, the ice grains only contain traces of sodium.

b: Co-added spectra of two Na-rich water ice particles (type III); lower panel with magnified amplitude. These spectra typically show very few pure water and Na-hydrate clusters, if any. They are characterised by an abundant Na+ mass line followed by a peak-sequence of hydroxy-cluster-ions Na(NaOH)n+. Laboratory experiments confirm that this cluster type is only dominant if the Na/H2O ratio exceeds 10-3. The pronounced appearance of Na(NaOH) n signatures also indicates an alkaline pH-value. In addition, these spectra often show ions with masses of Na(NaCl)n+, (n = 1-3), and Na(Na2CO3)+ which provide evidence for NaCl followed by NaHCO3 and/or Na2CO3 as the main Na-bearing compounds. A small amount of K+ is also present. These are exactly the four most abundant species predicted for an oceanic composition on Enceladus.