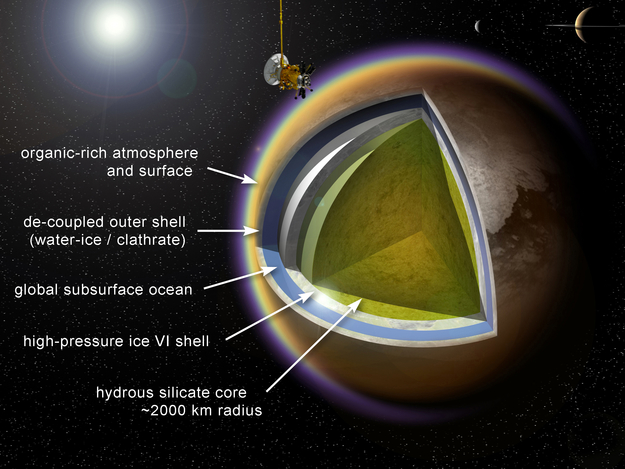 This artist's concept shows a possible model of Titan's internal structure that incorporates data from NASA's Cassini spacecraft. In this model, Titan is fully differentiated, which means the denser core of the moon has separated from its outer parts. This model proposes a core consisting entirely of water-bearing rocks and a subsurface ocean of liquid water. The mantle, in this image, is made of icy layers, one that is a layer of high-pressure ice closer to the core and an outer ice shell on top of the sub-surface ocean.

A model of Cassini is shown making a targeted flyby over Titan's cloudtops, with Saturn and Enceladus appearing at upper right.

The Cassini-Huygens mission is a cooperative project of NASA, the European Space Agency and the Italian Space Agency. The Jet Propulsion Laboratory, a division of the California Institute of Technology in Pasadena, manages the Cassini-Huygens mission for NASA's Science Mission Directorate, Washington, D.C. The Cassini orbiter was designed, developed and assembled at JPL. The radio science team is based at Wellesley College, Wellesley, Massachusetts.