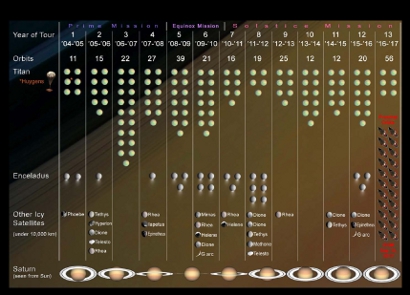 Cassini's orbits of Saturn and flybys of its moons from launch (Prime mission), through the first (Equinox) and second extensions (Solstice), until the end of its mission (Proximal orbits).

The Cassini-Huygens mission is designed to explore the Saturn system, including its rings and moons, with a special focus on Titan. After its launch on 15 October 1997, the nominal (Prime) mission at Saturn began on 1 July 2004. By the time the nominal mission was completed in July 2008, Cassini had completed 75 orbits around Saturn and 44 Titan flybys.

A first mission extension, called the Equinox mission, started on July 2008 and lasted for two years until October 2010. A major objective of this mission phase was to observe the Saturn system while the Sun crossed Saturn's equatorial plane. The second extension, called the ‘Solstice mission' is now underway, and will last until 2017. It's major objective is the monitoring of seasonal changes induced by varying solar illumination, until the Sun reaches its highest elevation above Saturn's equatorial plane.

Cassini-Huygens is a cooperative project of NASA, ESA, and the Italian Space Agency (ASI). NASA's Jet Propulsion Laboratory, a division of the California Institute of Technology in Pasadena, manages the mission for NASA's Science Mission Directorate, Washington, DC. The Cassini orbiter was designed, developed and assembled at JPL.