The formation of aerosols in Titan's haze (annotated)

The formation of aerosols in Titan's haze (annotated) 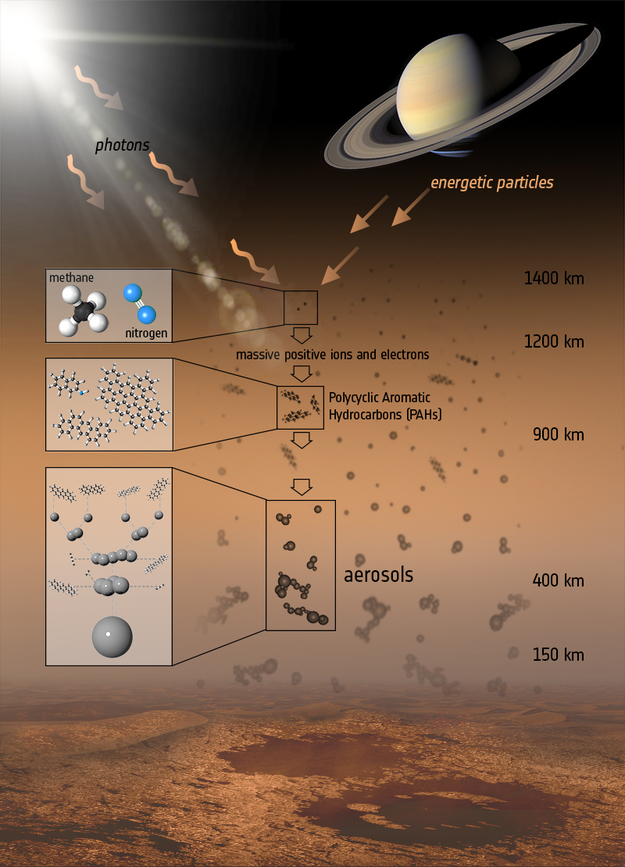 This illustration shows the various steps that lead to the formation of the aerosols that make up the haze on Titan, Saturn's largest moon.

When sunlight or highly energetic particles from Saturn's magnetosphere hit the layers of Titan's atmosphere above 1000 km, the nitrogen and methane molecules there are broken up. This results in the formation of massive positive ions and electrons, which trigger a chain of chemical reactions that produce a variety of hydrocarbons. Many of these hydrocarbons have been detected in Titan's atmosphere, including Polycyclic Aromatic Hydrocarbons (PAHs), which are large carbon-based molecules that form from the aggregation of smaller hydrocarbons. Some of the PAHs detected in the atmosphere of Titan also contain nitrogen atoms

PAHs are the first step in a sequence of increasingly larger compounds. Models show how PAHs can coagulate and form large aggregates, which tend to sink, due to their greater weight, into the lower atmospheric layers. The higher densities in Titan's lower atmosphere favour the further growth of these large conglomerates of atoms and molecules. These reactions eventually lead to the production of carbon-based aerosols, large aggregates of atoms and molecules that are found in the lower layers of the haze that enshrouds Titan, well below 500 km.