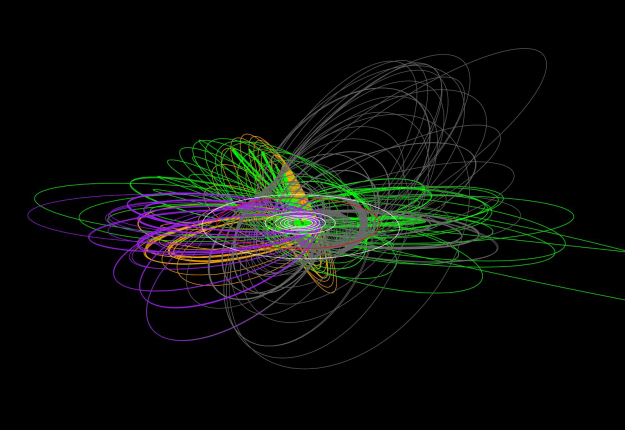 This picture traces Cassini's orbits from Saturn orbit insertion, on 1 July 2004, through the planned end of the mission, on 15 September 2017.

Saturn is in the centre, with the orbit of its largest moon Titan in red and the orbits of its six other inner satellites in white.

Cassini's prime mission, completed in 2008, is shown in green. Its first mission extension, which was known as the Equinox Mission and ended in 2010, is shown in orange. The completed orbits of its second mission extension, known as the Solstice Mission, are shown in purple. Orbits after Cassini's 15th anniversary of launch, on 15 October 2012, appear in dark grey. These include orbits that pass inside Saturn's innermost ring, which start in April 2017.

Flybys are a major element of Cassini's tour. The spacecraft's looping, elliptical path around Saturn is carefully designed to enable occasional visits to the many moons in the system. All flybys provide an opportunity to learn more about Saturn's icy satellites, and encounters with giant Titan are actually used to navigate the spacecraft, changing its orbit or setting up future flybys.

Many of the most exciting encounters are "targeted" flybys, for which Cassini's flight path is steered so the spacecraft will pass by a specific moon at a predetermined distance, referred to as "closest approach". Cassini's targeted flybys have yielded incredible close-up views and many groundbreaking science results.

The Cassini–Huygens mission is a cooperative project of NASA, ESA and the Italian Space Agency (ASI). NASA's Jet Propulsion Laboratory, a division of the California Institute of Technology in Pasadena, manages the mission for NASA's Science Mission Directorate, Washington, D.C.