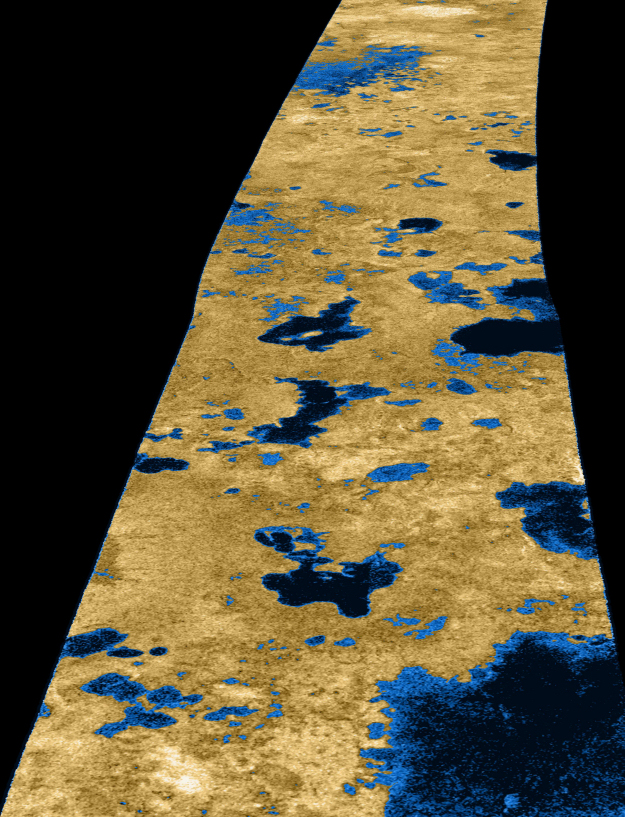 Since 2006, the international Cassini mission has revealed hundreds of lakes and seas spread across the icy surface of Saturn's moon Titan, mostly in its polar regions. These lakes are filled not with water but with hydrocarbons, a form of organic compound that is also found naturally on Earth and includes methane.

This radar image was acquired by the Cassini radar instrument in synthetic aperture mode on 22 July 2006. The image is centred near 80 degrees north, 35 degrees west and is about 140 kilometres across. The smallest details in this image are about 500 meters across.

The intensity in this coloured image is proportional to how much radar brightness is returned, or more specifically, the logarithm of the radar backscatter cross-section. The colours are not a representation of what the human eye would see.

The lakes, darker than the surrounding terrain, are emphasized here by tinting regions of low backscatter in blue. Radar-brighter regions are shown in tan. The strip of radar imagery is foreshortened to simulate an oblique view of the highest latitude region, seen from a point to its west.