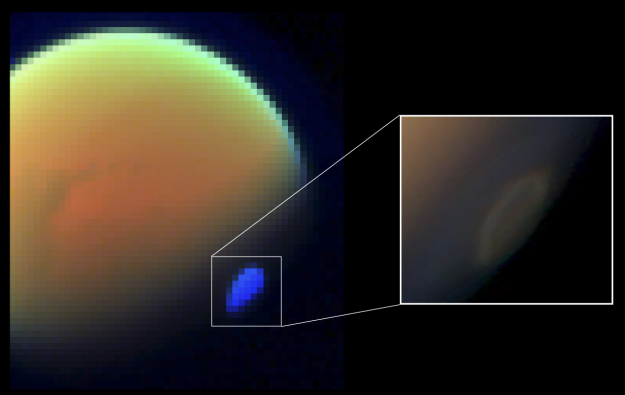 A map of Titan, the largest moon of Saturn, obtained with the Cassini Visual and Infrared Mapping Spectrometer (VIMS). The insert shows a natural-colour view (also from Cassini) of the southern polar vortex, a huge swirling cloud that was first observed in 2012.

Three components are evident in the VIMS map, and they are shown in different colours according to the different characteristics of their light. These are the surface of Titan (shown in orange), the atmospheric haze along the limb (green) and the polar vortex (blue).

When observed with VIMS, the southern polar vortex shows a remarkable difference with respect to other portions of Titan's atmosphere: a signature of frozen hydrogen cyanide molecules (HCN). This discovery suggests that the atmosphere of Titan's southern hemisphere is cooling much faster than expected.

The VIMS infrared image was processed by Remco de Kok of Leiden Observatory and SRON Netherlands Institute for Space Research.