Sand dunes and mega-yardangs on Earth

Sand dunes and mega-yardangs on Earth 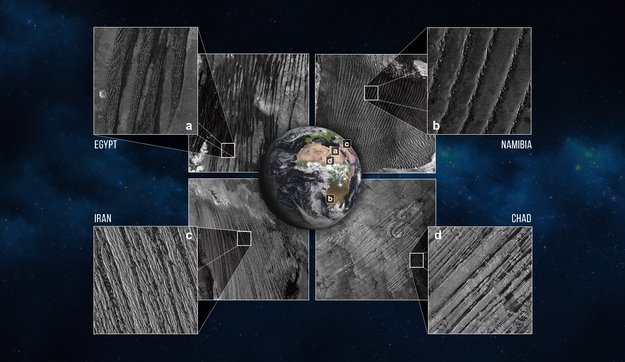 This image shows four snapshots of surface features found here on Earth, with a corresponding map of where each is located on the globe. The square images were taken by TerraSAR-X, a radar satellite currently in orbit around our planet. Each of the inner squares is approximately 100 km across, each zoomed square is roughly 10 km across (with features down to 18 m resolved), and all are illuminated from the left side of the frame.

Linear dunes are familiar features – we see such sand formations often here on Earth, when the wind picks up and deposits material in characteristic ridged patterns. Boxes a and b show linear sand dunes located in the Great Sand Sea in Egypt and the Namib Desert in Namibia respectively. Both sets of dunes are roughly north-south oriented and are similar in size, but their radar signatures differ due to the properties of the material sitting in between the dune ridges – those shown in box b, in Namibia, are sand-covered, and those in box a, in Egypt, are bare, which causes the radar signal to scatter differently.

Boxes c and d show features known as mega-yardangs, found in the Lut Desert in Iran and the Borkou Desert in Chad respectively. While the aforementioned linear sand dunes are the result of winds moving material around, rocky mega-yardangs are instead created when winds erode soft sediment deposits, often associated with old lakes.

Scientists have used these images of Earth to learn more about Saturn's moon Titan, a method known as comparative planetology. This is a powerful technique when it is not possible to visit the study site directly, or to view it in high enough resolution. By studying features in detail on Earth, we can learn much about what they might be like elsewhere in our Solar System.

Cassini has been studying the Saturnian system since 2004. Using the RADAR instrument it has shown up to 17% of Titan’s surface to be covered in linear sand dunes. By comparing these TerraSAR-X images of Earth with those taken of Titan by Cassini, scientists have found the first ever evidence for mega-yardangs on Titan, and were able to distinguish between the moon's sand-covered and bare linear dunes. To see the corresponding images of Titan in more detail, click here.

Deserts and dunes: Earth as an analogue for Titan