Sand dunes and mega-yardangs on Titan

Sand dunes and mega-yardangs on Titan 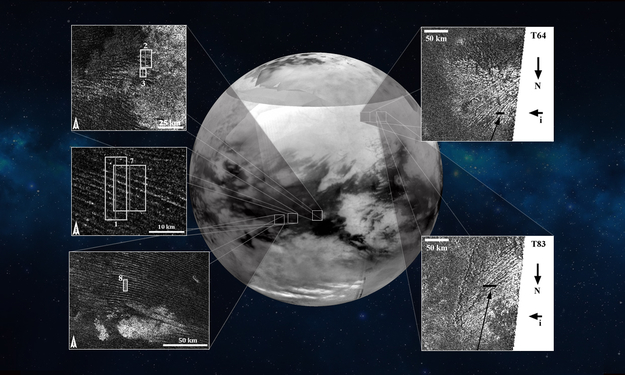 Cassini has been studying Saturn and its moons since 2004. In its studies of Titan, Saturn's largest moon, with the RADAR instrument it has revealed numerous surface features – rivers, seas and lakes of liquid methane, and vast dune fields covering up to 17% of the moon's surface, forming a dune-filled band spanning Titan's equatorial regions.

However, it is difficult to study Titan's surface in detail due to the limited resolution of our images. To get a better understanding, scientists have studied surface features found on Earth to infer more about those found on Titan, a method known as comparative planetology.

In this view, five regions of Titan's surface are marked with boxes. Each inset image was taken by Cassini's RADAR instrument at a wavelength of 2.2 cm (Ku-band) and a resolution of 300 m – the scale of each is marked, with the two on the right also displaying their orientation and angle of illumination (i).

The zoomed-in RADAR shots on the left of the frame show the sites of various linear sand dunes located in the Belet Sand Sea. Linear dunes are familiar features – we see such sand formations often here on Earth, when the wind picks up and deposits material in characteristic ridged patterns. The scientists compared these images of Titan with images of both bare and sand-covered linear dunes found in Egypt and Namibia, and with other surface features found in Chad and Iran.

Sand-covered and bare dunes display different radar signatures, as they scatter the signal differently. Both types seem to be present in Titan's Belet Sand Sea. The lower two zoomed-in insets on the left show dunes thought to be similar to the sand-covered dunes found in the Namib Desert in Namibia, while the top one shows dunes more similar to the bare dunes found Egypt's Great Sand Sea.

The zoomed-in views on the right side of the frame show features identified as possible mega-yardangs, rocky structures formed when winds erode the soft deposits found in ancient lake beds, for instance. We see these on Earth in the deserts of Chad and Iran, but this is the first time evidence for mega-yardangs has been found on Titan.

The view of Titan in the middle of the frame was created using images from Cassini's imaging science subsystem (ISS). The Cassini Imaging Team combined numerous images to create a global digital map of the moon, which was released in April 2011. This map was then folded onto a globe of radius 2575 km, to recreate Titan as accurately as possible. Each pixel represents 4 km.

Deserts and dunes: Earth as an analogue for Titan