ESA Science & Technology - The South Pole of Enceladus in microwaves

The South Pole of Enceladus in microwaves

The South Pole of Enceladus in microwaves 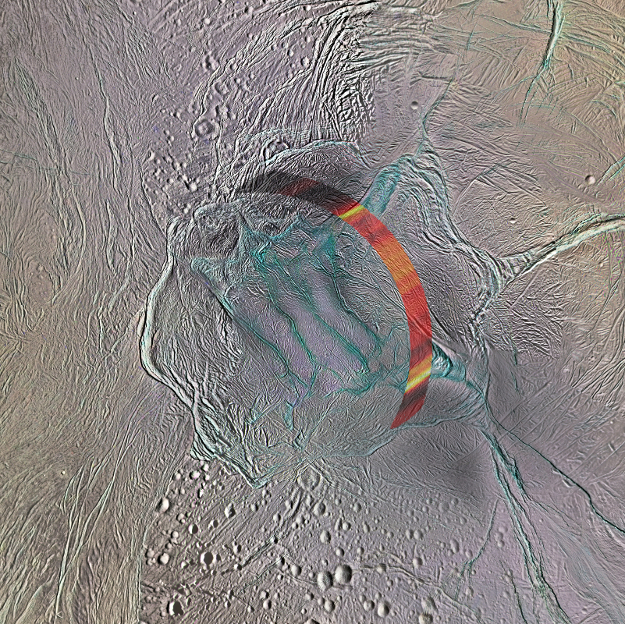 The South Pole region on Enceladus, the sixth-largest moon of Saturn, imaged by the Imaging Science Subsystem (ISS) on the international Cassini mission.

At the centre of the image are the so-called 'tiger stripes' – four warm fractures in the moon's icy surface that eject plumes of water vapour and ice with a salty composition.

Above and to the right of the tiger stripes is the arc-shaped swathe that was observed with Cassini's RADAR instrument at a wavelength of 2.2 cm. The arc-shaped portion of the surface is about 500 km long and 25 km wide, and it is located just 30 km to 50 km north of the tiger-stripe fractures. The colour of the swathe indicates the excess in heat flux derived from the observations: the thermal anomaly is most pronounced in the yellow regions, which coincide with fractures in the icy crust.

The observations revealed that the region is warmer than expected below its icy surface, suggesting that heat is being produced and transported under the crust and that Enceladus's underground sea might be lurking only a few kilometres underneath.

Enceladus' south pole is warm under the frost