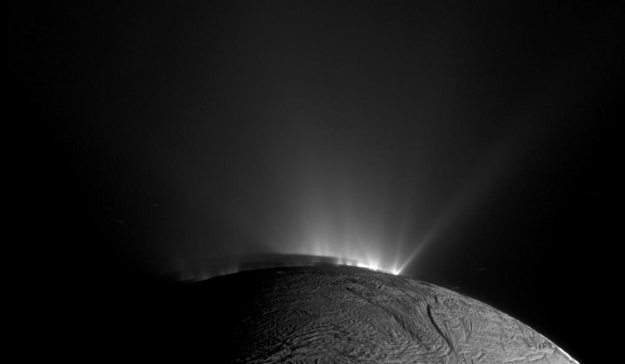 Cassini narrow-angle camera image looking across the south pole of Enceladus, taken through the camera's clear filter on 30 November 2010, 1.4 years after southern autumnal equinox. At the time, the spacecraft was essentially in the moon's equatorial plane.

The image scale is 390 metres per pixel and the Sun-Enceladus-spacecraft, or phase, angle is 162.5 degrees.

The shadow of the body of Enceladus on the lower portions of the jets is clearly seen.

The Cassini-Huygens mission is a cooperative project of NASA, ESA and the Italian Space Agency. NASA's Jet Propulsion Laboratory manages the mission for NASA.

Complex organics bubble from the depths of ocean-world Enceladus