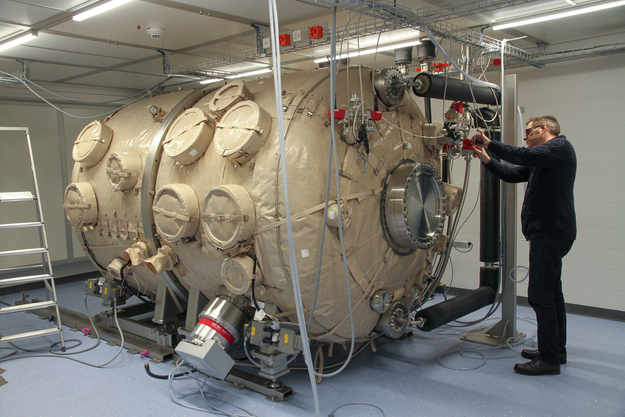 Christopher Broeg, the CHEOPS Consortium Project Manager, standing next to the vacuum chamber that will be used to test, qualify and calibrate the payload and constituent components for the CHaracterising ExOPlanet Satellite (CHEOPS). The chamber was installed at the Center for Space and Habitability (CSH), University of Bern, Switzerland, in February 2015.

CHEOPS will be the first mission dedicated to the search for and study of the transits of known exoplanets orbiting bright stars. The small CHEOPS spacecraft (dimensions of about 1.5m × 1.5m × 1.5m) carries a single instrument: an ultra-high precision photometer covering the optical/near-infrared waveband (400 – 1100nm), and sitting in the focal plane of a 32cm diameter clear aperture space telescope.

The vacuum test chamber is 3m long with a diameter of 2m, and weighs 5500 kg. It was custom-built by Pfeiffer Vacuum Switzerland/Trinos Vakuum-Systeme GmbH Germany, and delivered to the University of Bern in the middle of February.

Before being used for testing, the chamber must complete various functional tests, including leak tests, and thermal tests covering the temperature range from minus 80 degrees Celsius to 160 degrees Celsius. Once these commissioning tests have been completed, the room housing the vacuum chamber will be thoroughly cleaned in order to bring it up to the ISO 5 cleanroom standards needed for CHEOPS testing and integration.

Structural and electronic components of CHEOPS will then be installed in the chamber and will be thermally cycled under vacuum between minus 80 degrees Celsius and 60 degrees Celsius, reproducing the full range of temperatures that the CHEOPS payload will experience in-flight. The vacuum chamber will also be extensively used during the payload assembly, integration and testing/verification phase.

CHEOPS is expected to launch towards the end of 2017 into a circular Sun-synchronous orbit, at an altitude of between 650km and 800km.