Installing CHEOPS in the acoustic chamber at ESTEC

Installing CHEOPS in the acoustic chamber at ESTEC 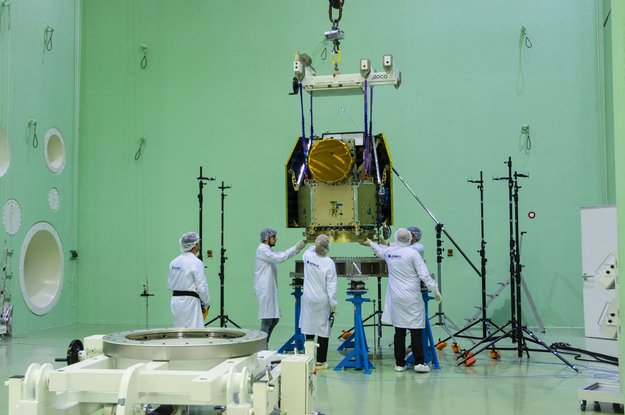 The CHEOPS spacecraft being placed in the Large European Acoustic Facility (LEAF) test chamber at ESA's European Space Research and Technology Centre (ESTEC) in Noordwijk, the Netherlands, on 5 November 2015.

The spacecraft was lifted by overhead crane from its ground support trolley (in the foreground on the left) onto the ground support structure inside the LEAF. Here, CHEOPS – composed of the spacecraft platform Structural Qualification Model (SQM) and the Instrument Structural and Thermal Model (STM) – was subjected to several acoustic tests that were performed on 6 November 2015.

The white circular holes in the wall of the acoustic test facility, seen in the background on the left, are the ends of large sound horns that are used to produce noise for the acoustic tests.