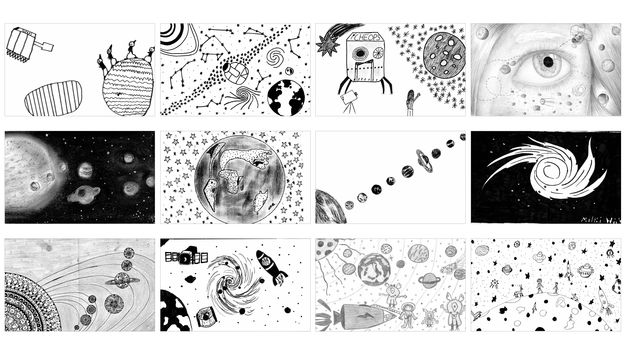 Selection of drawings submitted to the Cheops drawing competition.

Cheops is a small space telescope dedicated to observing nearby stars that are already known to have planets. The satellite is being built as a collaboration between ESA and a consortium of European countries led by Switzerland.

The competition was coordinated by the University of Bern, Switzerland, the lead institution, and run in collaboration with ESA and mission partner institutions in the Cheops countries: Austria, Belgium, France, Germany, Hungary, Italy, Portugal, Spain, Sweden, Switzerland and the UK.

The competition ran between May and October 2015 and was aimed at children between the ages of 8 and 14 from ESA member and cooperating states. Around 1700 drawings were sent directly to ESA, while the partner institutions across Europe received thousands more.

Out of the many excellent entries featuring a variety of cosmic settings, a total of 3000 were selected. These will now be scanned and shrunk by a factor of 1000 to be engraved on two metal plaques that will be attached to the satellite and fly into space.

A showcase of all winning entries can be viewed online.

Three thousand drawings to fly into space on CHEOPS