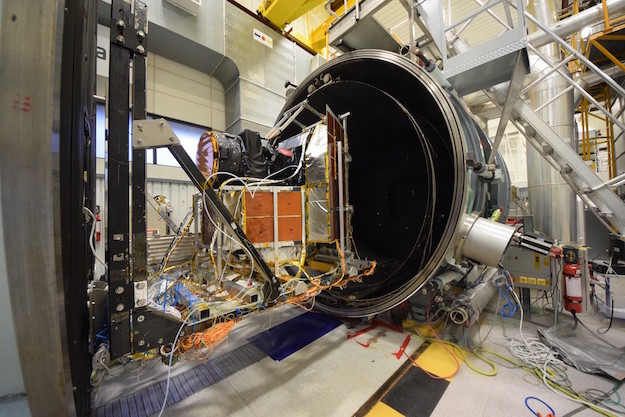 The CHEOPS satellite was cooled to -165 degrees Celsius in the thermal-vacuum chamber at the Airbus Engineering Validation Test facility in Toulouse, France.

In orbit, the temperature of the telescope tube will be stabilised by actively controlling heaters to compensate for changes in solar flux. During testing, flat heater plates were used to simulate the effect of solar radiation and confirm that the temperature of the satellite could be controlled to the required specification.

In this image, the rear side of a heater plate is seen facing the spacecraft platform below the black telescope tube. It is copper-coloured and divided into four squared portions; the unseen side is black and faces the instrument. Larger heater plates were also placed behind the satellite facing the solar panels and the edge of one of these can be seen at the rear of the satellite.

#13: CHEOPS – chilled and checked, shaken and not stirred