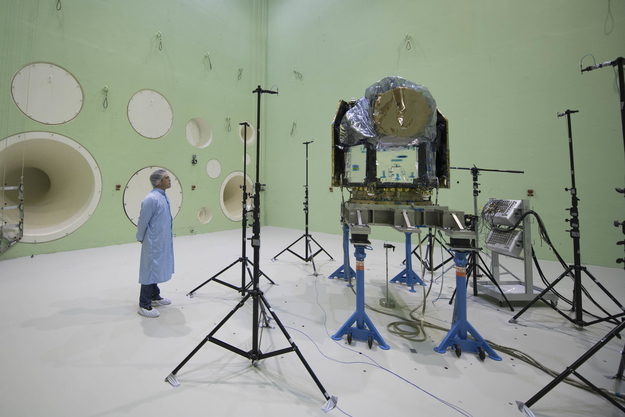 LEAF can subject satellites to the same volume of noise a launcher produces as it takes off and flies through the atmosphere. One wall of the chamber – which stands 11 m wide by 9 m deep and 16.4 m high – incorporates a set of enormous sound horns. Nitrogen shot through the horns can produce a range of noise up to more than 154 decibels, like standing close to multiple jets taking off.

ESA's CHEOPS satellite will measure the sizes of known exoplanets by detecting tiny fluctuations in the light of their parent stars. CHEOPS, or 'CHaracterising ExOPlanet Satellite', combines a state-of-the-art scientific performance with a compact design – 1.5 m by 1.4 m by 1.5 m in size, it weighs in at about 300 kg fully fuelled – allowing it to be flown as a secondary passenger on a Soyuz launcher inside its ASAP-S adapter.

A test version of CHEOPS – its 'structural qualification model' plus 'instrument structural and thermal model' – underwent previous LEAF testing back in November 2015. Once its acoustic testing was complete this final CHEOPS 'flight model' went on to electromagnetic compatibility testing in ESA's Maxwell facility.

Once its test campaign is complete, the satellite is scheduled for launch readiness at Europe's Spaceport in French Guiana early next year.

#14: CHEOPS - withstanding the sound of launch and avoiding radio interference