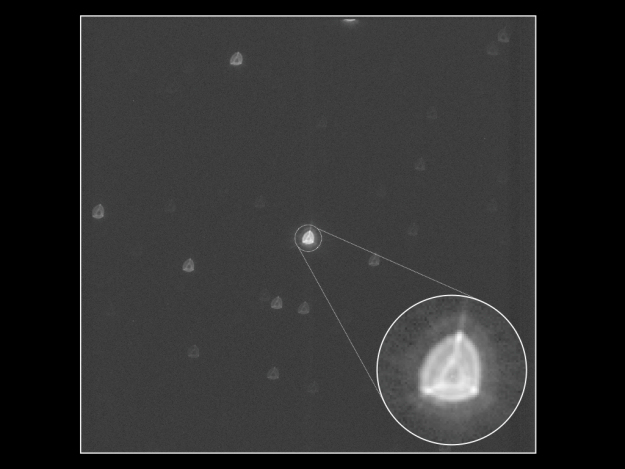 Image of HD 70843, the star chosen as the first target for CHEOPS, ESA's Characterising ExOPlanet Satellite. The star, located around 150 light years away in the constellation of Cancer, is visible at the centre of the image, surrounded by fainter stars in the background.

The peculiar shape of the stars in the image is a result of the deliberate defocusing of the CHEOPS optics, which spreads the light from each star over many pixels. This makes the measurements of the starlight more precise, as they are much less sensitive to small differences in the response of individual pixels in the CCD and to variations in the telescope pointing. The triangular appearance of the stars is a known effect of the three struts that support the telescope's primary mirror.

The image covers about 1000 × 1000 pixels, with each pixel edge representing a tiny angle of about 0.0003 degrees on the sky, equivalent to less than one thousandth of the full Moon's diameter. The inset in the lower right corner shows a region covering about 100 × 100 pixels, centred on the target star.

Launched on 18 December 2019, CHEOPS is ESA's first mission dedicated to the study of exoplanets.