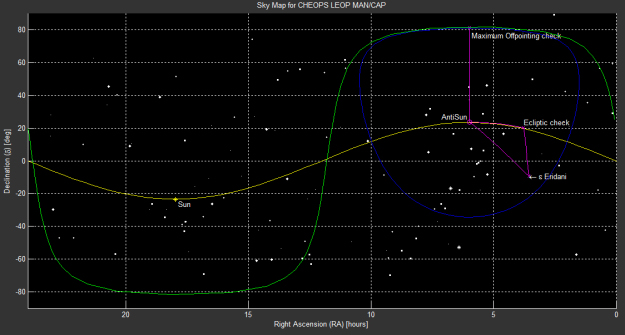 Following launch on 18 December 2019, the CHEOPS spacecraft was pointed in sequence to different directions in the sky as part of the Launch and Early Orbit Phase (LEOP) activities. The test successfully demonstrated the in-orbit performance of the attitude control system and the thermal response of the spacecraft.

The CHEOPS telescope always points towards the night side of Earth, in order to limit the impact on the measurements of sunlight and reflected stray light from Earth. At any time, the telescope can be pointed up to 60 degrees from the anti-Sun direction to perform an observation of an exoplanet transit. In this graph, the blue line represents this maximum off-pointing, the yellow line indicates the Ecliptic plane – which describes the path of the Sun in the sky – and the green line the orbital plane of CHEOPS. The pink lines connect the three pointing directions that were tested during LEOP activities: the first one, towards epsilon Eridani, a nearby, bright star potentially hosting a planetary system; a second pointing direction along the Ecliptic plane; and a third pointing direction at the maximum off-pointing and within the orbital plane of CHEOPS.