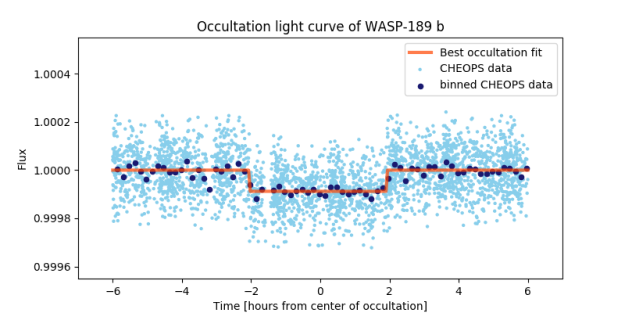 Above: light curve of occultation of WASP-189 b behind its host star HD 133112, observed with ESA’s CHEOPS mission. The bright blue points are the CHEOPS observations at the full time resolution of 33.4 seconds, whilst the dark blue points are the same data, binned into 10 minute time intervals. These data show how the light coming from the planet is missing while it passes behind its star.

Below: light curve of the transit of WASP-189 b in front of its host star HD 133112, also observed with CHEOPS. Dark blue points are the data at full time resolution. The orange line is the best model calculated when accounting for the deformation of the host star. In contrast, the green line shows the model computed when assuming a spherical star. The two figures below show the residuals of the two models, illustrating how the data are discrepant with the spherical-star model.

The planet WASP-189 b is a gas giant, more than 1.5 times the size of Jupiter. It is about 20 times closer to its host star than the Earth to the Sun. WASP-189 b is one of the hottest exoplanets known: CHEOPS scientists have measured its temperature to be approximately 3200 degrees Celsius.

HD 133112 is a massive blue star 322 light years away from Earth, and it is wider at its equator than at its poles as it is spinning so fast that it is pulled outwards around its equator.

The new and high-precision CHEOPS observations enable a substantial revision of the planetary parameters, as well as the geometry of the planet’s orbit: by combining updated parameters of the star with the transit data, scientists have found that the planet is 15% larger than previously thought, and so less dense; they have also revealed that the planet’s orbit is tilted away from the stellar equator, with the planet passing over the star’s poles as it circles the star. 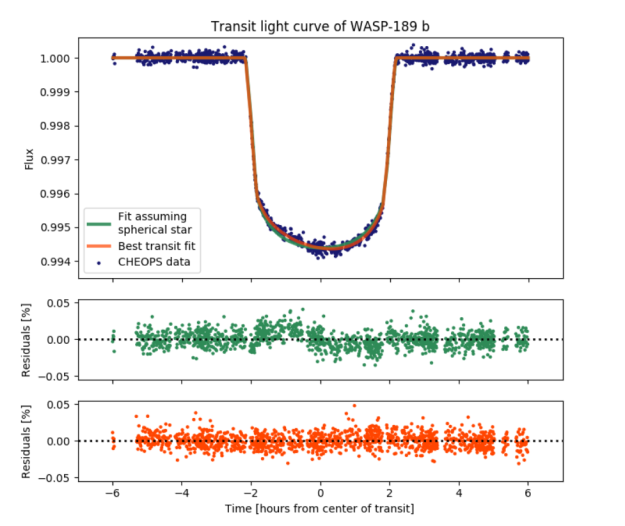