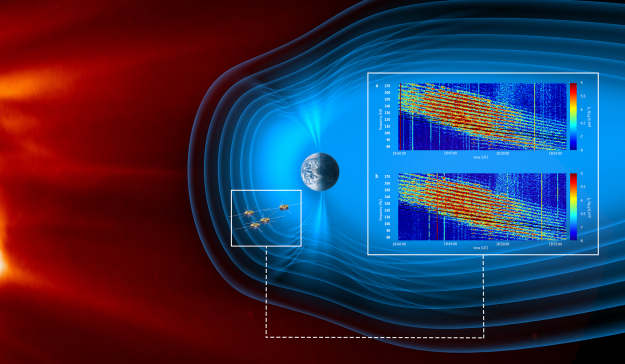 Illustration of the four Cluster spacecraft flying through the Earth's outer radiation belt, close to the geomagnetic equator, where on 6 July 2013, between 18:40 and 18:55 GMT, Cluster observed the type of plasma waves known as equatorial noise.

Two of the spacecraft, Cluster 3 and 4, were very near - within 60 km of each other - while Cluster 1 was approximately 800 km from the pair, and Cluster 2 was around 4400 km away in the earthward direction from the other three.

The inset on the right shows the observations by the Spatio-Temporal Analysis of Field Fluctuations (STAFF) instruments on Cluster 3 (upper panel) and Cluster 4 (lower panel). These observations revealed that the waves had a highly structured and periodic pattern, providing clear observational evidence about how they were generated. The data also revealed in detail their banded structure, the most remarkable example of these structures ever observed in space.

Note: the illustration is not to scale.