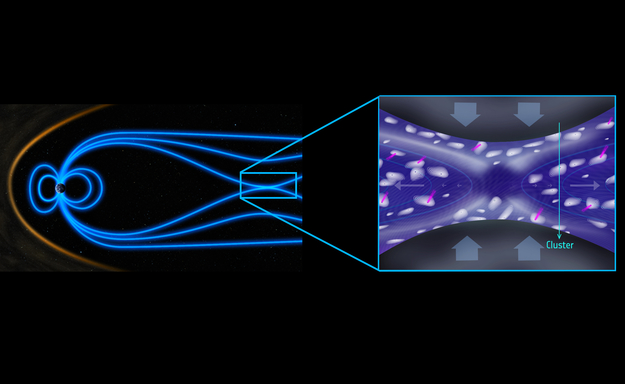 In the insert, two plasma flows with anti-parallel magnetic fields are pushed together, flowing in from above and below. At the crossing of the two flows, an X-line arises, whereas smaller X-lines as well as O-lines – whirlpool-shaped vortices where the magnetic field lines swirl together – may appear throughout the broader diffusion region.

As revealed in a study based on data from ESA's Cluster mission, most of the energy dissipated during a reconnection event is not released at the X-lines, but rather at the O-lines. The Cluster data were from 9 October 2003, when the four spacecraft were flying through the diffusion region (indicated by the arrow), only about 200 km apart. During their passage they encountered several potential sites of X- and O-lines.