Massive stars in the Cygnus region

Massive stars in the Cygnus region 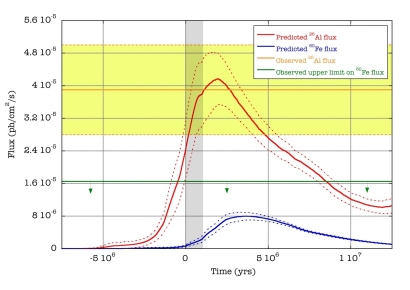 The 26Al and 60Fe radio-isotopes are thought to be predominantly produced by massive stars at various stages of their evolution. Through stellar winds and supernova explosions, they are released in the interstellar medium (ISM) where they decay over timescales of 106 years. The study of the corresponding nuclear gamma-ray line emission at 1809 keV (26Al) and 1173/1332 keV (60Fe) can be a useful probe of massive star evolution and nucleosynthesis.

The Cygnus region harbours a strong concentration of massive stars: about 170 O stars distributed in half a dozen OB associations and a dozen open clusters, all at a distance of just 1-2 kpc from us and collectively referred to as the Cygnus complex. This region was observed by CGRO/COMPTEL to shine at 1809 keV. The flux measured by COMPTEL was found to be 2-3 times higher than predicted from the stellar models available in the late 1990s-early 2000s. Now, the Cygnus complex has been re-evaluated using INTEGRAL/SPI observations and improved stellar models.

The results have been compared with population synthesis predictions based on recent stellar models including some effects of stellar rotation and a coherent estimate of the contribution of SNIb/c. As shown in the above figure, the observations now agree with the theoretical predictions (the vertical shaded bar indicates the estimated current position along the time axis).