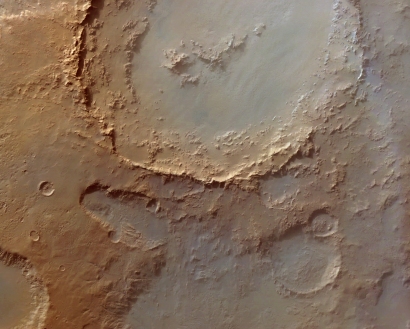 This image, taken by the High Resolution Stereo Camera (HRSC) on board ESA's Mars Express spacecraft, shows Crater Hale in the Argyre basin of the southern hemisphere of Mars. The image shows an area close to the northern rim of the Argyre basin, located at latitude 36° South and longitude 324° East. It was taken with a ground resolution of about 40 metres per pixel during Mars Express orbit 533 in June 2004. Slight periodic colour and brightness variations in parts of the image indicate atmospheric waves in clouds.

Crater Hale, with its terraced walls, central peak and a part of the inner ring is visible in the upper (eastern) part of the image. The region has been eroded heavily by deposits caused by this impact, and subsequent processes. On the southern rim of Hale, parts of the crater wall have moved downslope towards the crater's centre (see also Crater Hale Southern Rim). At the bottom (western) part of the picture the surface shows a network of fluvial channels which may have been caused by running water (see also Crater Hale Western Rim).

Image resolution has been decreased for use on the internet. The colour image was processed using the HRSC nadir (vertical view) and three colour channels.