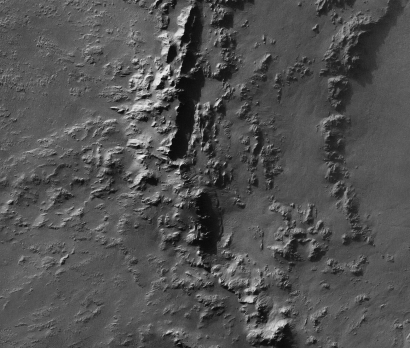 This image, taken by the High Resolution Stereo Camera (HRSC) on board ESA's Mars Express spacecraft, shows the southern rim of Crater Hale in the Argyre basin of the southern hemisphere of Mars. It was taken with a ground resolution of about 40 metres per pixel during Mars Express orbit 533 in June 2004.

The Crater Hale lies in an area close to the northern rim of the Argyre basin, located at latitude 36° South and longitude 324° East. On the southern rim of Hale, parts of the crater wall have moved downslope towards the crater's centre (to the right in this image).

On the west side of the crater the surface shows a network of fluvial channels which may have been caused by running water (see also Crater Hale Western Rim).