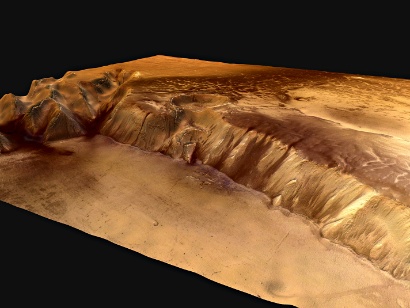 The glacier that caused the Kasei Valles valley was fed by water from the Echus Chasma region, which was driven out from underneath the surface by volcanic activity. Water was released by heating from volcanic activity in the channel floor as relatively recently as 20 million years ago.

This perspective image of the Echus Chasma was taken by Mars Express during orbit 97. It shows that liquid water was present on the surface of Mars thousands of millions of years ago.  Gigantic waterfalls poured over the 4000-metre high cliffs, and fed a lake in the valley. Later, when the planet became cooler, the lakes froze and glaciers formed, carving the giant Kasei Valles.