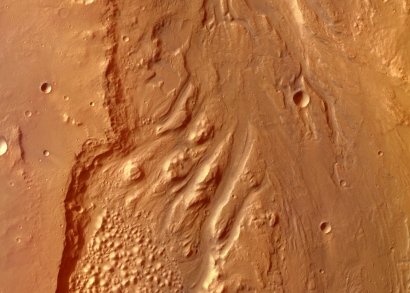 This image was taken by the HRSC aboard Mars Express in October 2004 from an altitude of 350 kilometres. North is up.

The image shows the transition zone between Iani Chaos and Ares Vallis. Ares Vallis is one of several big outflow channels on Mars in this region that formed billions of years ago. Many surface features suggest that erosion of large water flows had carved Ares Vallis in the Martian landscape. Most likely gigantic floods ran downhill, carving a deep canyon into Xanthe Terra. Rocks eroded from the valley flanks were milled into smaller fractions and transported in the running water.

This image of the transition zone between Iani Chaos and Ares Vallis shows a chaotic distribution of individual blocks of rock and hills forming a disrupted pattern. These 'knobs' are several hundred metres high. Scientists suggest that they are remnants of a pre-existing landscape that collapsed after cavities had formed beneath the surface.

The elongated curvature of features extending from south to north along with terraces, streamlined 'islands' and the smooth, flat surface in the valley centre are strong hints that it was running water that carved the valley.