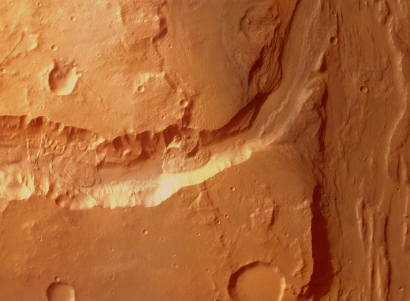 This image was taken by the HRSC on board Mars Express from an altitude of 350 kilometres. North is up.

The image shows a ten-kilometre-wide valley arm merging into Ares Vallis from the west. Ares Vallis is one of several big outflow channels on Mars in this region that formed billions of years ago. Many surface features suggest that erosion of large water flows had carved Ares Vallis in the Martian landscape. Most likely gigantic floods ran downhill, carving a deep canyon into Xanthe Terra. Rocks eroded from the valley flanks were milled into smaller fractions and transported in the running water.

Large amounts of water originating from Aram Chaos (outside the image) joined the northward running stream of Ares Vallis through this valley arm. Fan-shaped deposits on the valley floor are the remnants of landslides at the northern flanks.