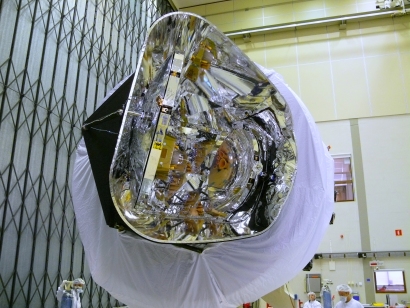 Friday, 18 April 2008, the payload module of the Planck spacecraft was wrapped inside a protective textile cover as part of the preparations for the spacecraft's transport on Monday 21 April.

This image shows the stage of the process with the lower part of the payload module (containing the V-grooves) already wrapped. Shortly after, the upper part with the baffle surrounding the telescope and focal plane unit was also wrapped in another textile cover (see related image in the right-hand navigation).