Hale-Bopp observed by SOHO/SWAN on 3 April 1997

Hale-Bopp observed by SOHO/SWAN on 3 April 1997 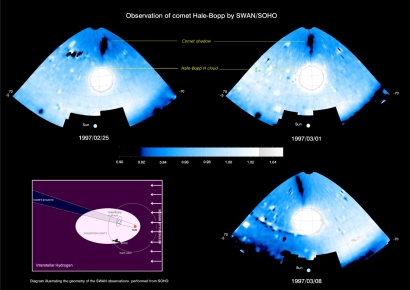 SOHO looks at a comet's shadow in space Depicted here is a series of three images of Comet Hale-Bopp's shadow taken by SOHO's SWAN instrument between 25 February, 1997 and 8 March, 1997. The blue-white monochrome images show a portion of the sky illuminated by the Sun's ultraviolet light. The Sun is shown as a round dot at the bottom. The bright white glow at the centre is a 150-million-kilometre-wide hydrogen cloud released by Hale-Bopp's nucleus.
View »
28-Sep-2022 21:47 UT

SOHO glimpses far side of the Sun, looks at a comet's shadow