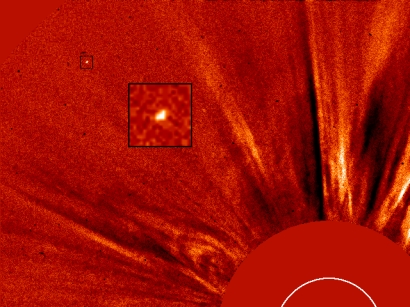 Calculations confirm that a comet spotted by Kazimieris Cernis of Vilnius, Lithuania, on 4 February is a previously unknown object, making it the 100th comet discovered with the SOHO spacecraft. Launched four years ago as a project of international cooperation between the European Space Agency and NASA, the Solar and Heliospheric Observatory has revolutionized the science of the Sun. It has also revealed an amazing number of kamikaze comets plunging into the solar atmosphere, which help to make SOHO the most prolific comet finder in the history of astronomy. But SOHO-100 is an ordinary comet, and so are two others that have appeared in the past few days.
View »
25-Sep-2022 17:30 UT