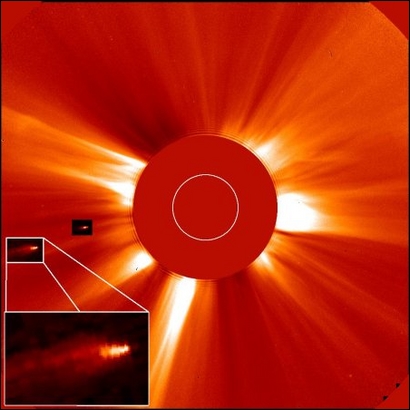 and has been confirmed as a member of the Kreutz family of Sun-grazing comets These comets are believed to be fragments of a parent body which was torn apart some time in the distant past. The image above is a composite of LASCO C2 data, the white light corona at 19:54 UT, and two UVCS observations of the comet itself. The UVCS images represent observations taken at 4.82 and 3.32 Solar Radii (Ro) over a time span of 19:11-20:02 UT and 20:11-20:45 UT respectively. Each UVCS image is a time sequence of several 200 second exposures as the comet passed across the entrance aperture. The UVCS comet images have been approximately positioned and scaled to the LASCO corona image. A wide, well-defined tail can be seen in the magnified version of the 4.82 Ro observation.

Several properties of the comet and the encountered coronal environment can be determined from this observation. The outgassing rate of water molecules was calculated at ~100 kg/s and the size of the cometary nucleus was on the order of 10 meters during the UVCS observations. The comet also acted as a probe for the determination of coronal conditions. Densities of about 10,000 particles per cubic centimeter at 4.82 Ro and 86,000 particles per cc at 3.32 Ro were found. This sharp increase suggests that the comet passed from a fast solar wind region to a denser slow solar wind area. All of the results presented here are preliminary estimates.

Credits: Thanks to Doug Biesecker (LASCO) for his early reporting and position estimates, Brian Marsden for the orbit prediction, and the UVCS ops and science teams (Michael Uzzo, Kuen Ko, Rai Wu, John Raymond) for making this observation possible.