ESA Science & Technology - Since its launch in 1995, ESA's solar satellite has spotted more than 435 comets

Since its launch in 1995, ESA's solar satellite has spotted more than 435 comets

Since its launch in 1995, ESA's solar satellite has spotted more than 435 comets 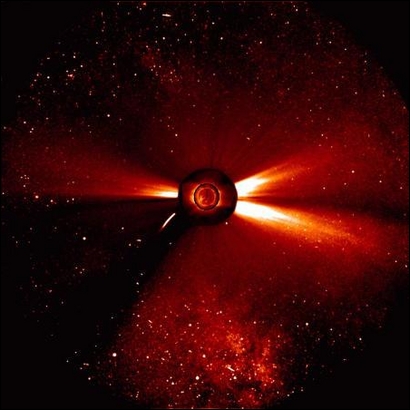 This composite image was created using three different instruments on the Solar and Heliospheric Observatory (SOHO). The solar disc image was taken by the Extreme Ultraviolet Imaging Telescope (EIT) in the Fe XV line at 284 Angstroms. This has an approximate temperature of 2-2.5 million Kelvin. The Sun's lower corona was imaged in the O VI line by the Ultraviolet Coronagraph Spectrometer (UVCS). The outermost image of the corona, shown in white light, was taken by SOHO's Large Angle Spectrometric Coronagraph (LASCO) on December 23, 1996 with the C3 coronagraph. Visible in the corona are several prominent streamers, one on the left (East) side of the Sun and two on the right (West). The image shows Comet SOHO-6 (C/1996 Y1) located at the bottom left of the Sun. Also visible is the Milky Way, which stretches from the top to the bottom in the image.
View »
8-Dec-2022 19:13 UT