SWAN observations of activity on the far side of the Sun

SWAN observations of activity on the far side of the Sun 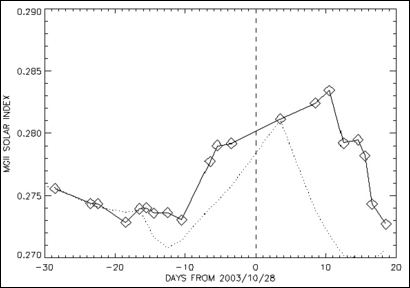 Solid line: Time variation of the MgII solar index as seen by a virtual observer, rotating with the Sun, and always facing the region of the Sun which was facing the Earth on 28 October 2003, when a very active region including two sunspots was visible. This variation was deduced from the SWAN full sky images in the light of Lyman-alpha, produced by the illumination by the Sun of hydrogen atoms in the solar system. The MgII index is a direct index of the solar activity, and the strong decrease observed between November 7 and November 17 is a sign of the fading activity of the two sunspots. Dotted line: Time variation of the MgII solar index as seen from the Earth for the same time period.
View »
8-Feb-2023 04:26 UT

SWAN observes fading sunspots on the back side of the Sun