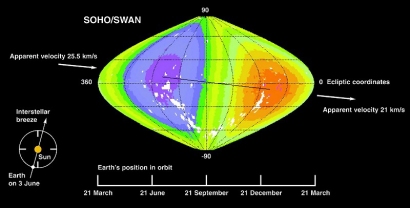 The SWAN instrument in SOHO displayed the direction and speed of hydrogen atoms streaming through the Solar System, in a chart of the whole sky. The interstellar gas glows with ultraviolet light, and the motions change the measured wavelength. SWAN also sees the hydrogen atoms disappearing because the solar wind breaks them up. "The solar wind destroys hydrogen atoms passing close to the Sun," says Jean-Loup Bertaux of the CNRS Service d'Aéronomie in France, who is in charge of SWAN. "Downwind we see distant survivors, whose speed is less affected by the Sun's gravity."
View »
2-Feb-2023 10:47 UT