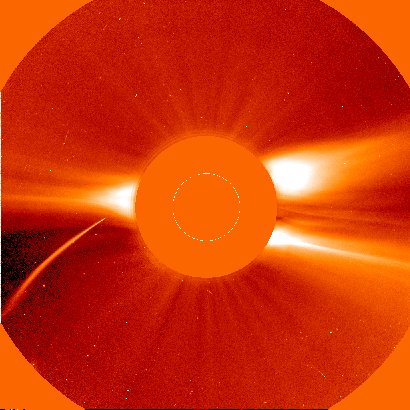 LASCO C2 image of the solar corona on 23 December 1996 at 04:44 UT showing the inner streamer belt along the Sun's equator, where the low latitude solar wind originates and is accelerated. Over the polar regions, one sees the polar plumes all the way out to the edge of the field of view. The field of view of this coronagraph encompasses 8.4 million kilometers of the inner heliosphere. The frame was selected to show Comet SOHO-6, one of seven sungrazers discovered so far by LASCO, as its head enters the equatorial solar wind region. It eventually plunged into the Sun.
View »
27-Sep-2022 21:54 UT