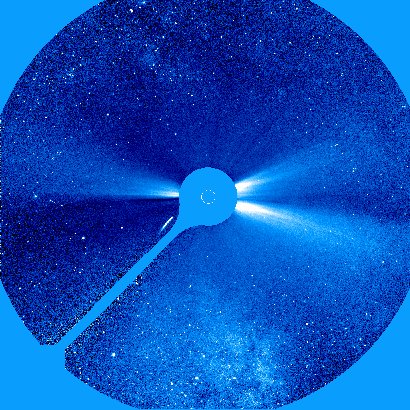 Image of the solar corona as recorded by the outer LASCO coragraph (C3) on 23 December 1996. The field of view of this instrument encompasses 32 diameters of the Sun. To put this in perspective, the diameter of the images is 45 million kilometers (28 million miles) at the distance of the Sun, or half of the diameter of the orbit of Mercury. The Sun is located in the constellation Sagittarius. The center of the Milky Way is visible, as well as the dark interstellar dust rift, which stretches from the south to the north. The cloudy solar wind can be seen along the ecliptic plane, both over the east and the west limb of the Sun, stronger over the latter. The image also shows Comet SOHO-6, one of 7 sungrazers discovered so far by LASCO, as its head enters the equatorial solar wind region.
View »
5-Jul-2022 07:16 UT