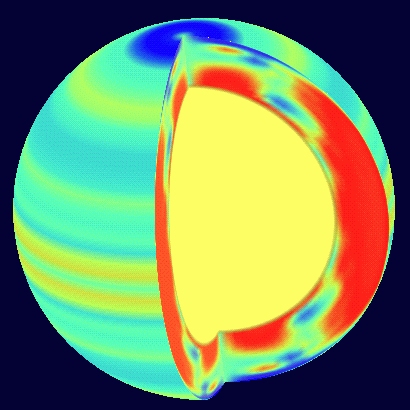 This image shows a different view of the Sun's rotation. In this figure we have removed the general variation from the equator to the poles. We computed the smooth variation of differential rotation in the Sun's surface, and subtracted that from the value at each latitude and depth. The result is shown as a speed of motion rather than rotation rate. Red-yellow is faster than average, and blue is slower than average. This highlights the smaller scale variations in the change in rotation from the equator to the poles. [For those who are interested, the term subtracted is of the form A + B*sin²(latitude) + C*sin4(latitude) where A = 450.78, B = -48.55, C = -67.76 all in nano-Hz]
19-Oct-2021 22:11 UT