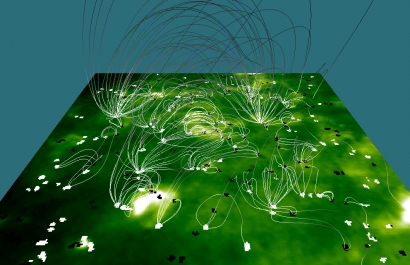 This image is a model of magnetic fields at the surface of the Sun developed using data from several instruments on board the ESA/NASA Solar and Heliospheric Observatory (SOHO) spacecraft. The data were taken on 19 October 1996. The green and white plane in the foreground is from the solar corona from the Extreme Ultraviolet Imaging Telescope (EIT) instrument.
View »
27-Nov-2022 04:57 UT