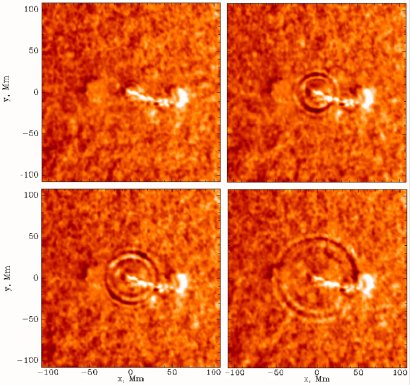 Sientists have shown for the first time that solar flares produce seismic waves in the Sun's interior that closely resemble those created by earthquakes on our planet. The researchers observed a flare-generated solar quake that contained about 40 000 times the energy released in the great earthquake that devastated San Francisco in 1906. The amount of energy released was enough to power the United States for 20 years at its current level of consumption, and was equivalent to an 11.3 magnitude earthquake, scientists calculated. Dr. Alexander G. Kosovichev, a senior research scientist from Stanford University, and Dr. Valentina V. Zharkova from Glasgow (United Kingdom) University found the tell-tale seismic signature in data on the Sun's surface collected by the Michelson Doppler Imager onboard the Solar and Heliospheric Observatory (SOHO) spacecraft immediately following a moderate-sized flare on 9 July 1996.
View »
28-Jan-2023 09:23 UT