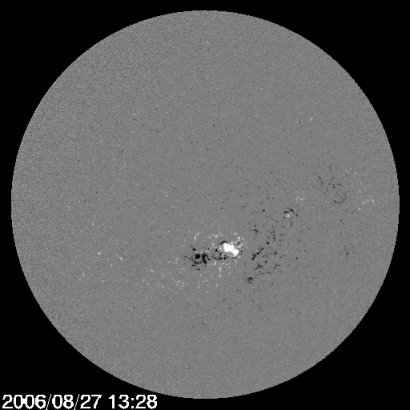 This magnetogram of the Sun's disk was obtained by the MDI instrument on board SOHO on 27 August 2006. The magnetogram shows the strength and sign of the magnetic field in the Sun's photosphere in greyscale:

The sunspots in the active region just below the centre of the Sun's disk have the reverse orientation compared to the sunspots of the current solar cycle. This region - no. 905, as assigned by the Space Environment Center - is located in the southern hemisphere with the white (N) spots leading and the dark (S) spots trailing with respect to the Sun's rotation.

Start of Next Solar Cycle?