Monitoring the Sun over a solar cycle with SOHO's EIT

Monitoring the Sun over a solar cycle with SOHO's EIT 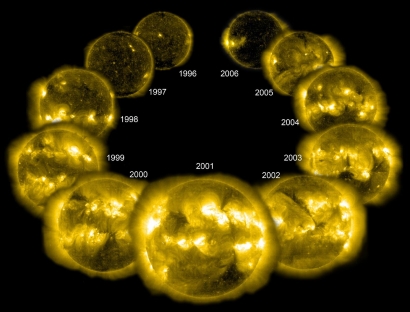 This image shows a sequence of snapshots of the Sun, taken each year over almost an entire, 11-year long solar cycle. The activity clearly peaks around the year 2001.

The images have been taken by SOHO's Extreme ultraviolet Imaging Telescope (EIT) at a wavelength of 284 Å, corresponding to the emission line of fourteen-times ionised iron atoms (Fe XV) and showing material at temperatures of about 2 million Kelvin.

A change of pace for EIT, SOHO's ground-breaking camera