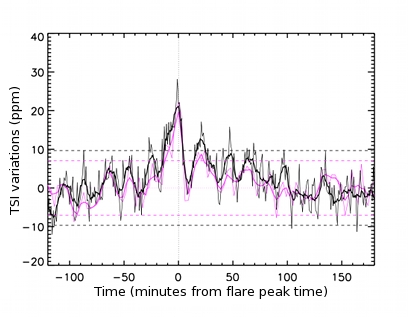 The figure above shows the averaged total solar irradiance (TSI) in parts-per-million (ppm) for 130 flares, covering X-ray class X10 to M5.1, as measured by the PMO (black curve) and DIARAD (pink curve) radiometers of the VIRGO experiment on the ESA/NASA SOHO spacecraft. The thick curves are running averages over 6 minutes. A study by M. Kretzschmar and collaborators into how much energy is contributed by flares to the total solar irradiance revealed that there was a significant peak in the TSI when a flare occurred. Not only was the total radiative output of the Sun sensitive to both large and small flares, but the total energy radiated by flares was found to be over 100 times greater than the energy that they radiate in X-rays. It turns out that X-rays contribute only a tiny part of the overall output of radiation during solar flares.
View »
27-Sep-2022 21:53 UT