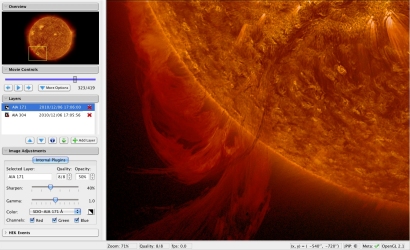 This screenshot captures a view of the JHelioviewer user interface. JHelioviewer is an interactive, open-source software package that allows users to access over 14 years worth of data from the ESA/NASA Solar and Heliospheric Observatory (SOHO) along with the latest information beaming back from NASA's Solar Dynamics Observatory (SDO). The tool allows users to overlay series of images from the Sun, from different instruments, and compile an animated sequence, which they can then manipulate as they watch, in order to follow a solar event from start to finish.

This screenshot shows a close-up, taken with NASA's Solar Dynamics Observatory (SDO) on 6 December 2010, of a magnetic filament snaking around the Sun's south-eastern limb. This demonstrates how users of JHelioviewer can zoom in on regions of the Sun that they wish to examine in detail.

JHelioviewer has been developed as part of the ESA/NASA Helioviewer Project. It is based on the JPEG 2000 image compression standard and written in Java and OpenGL.

ESA offers a new way of looking at the Sun