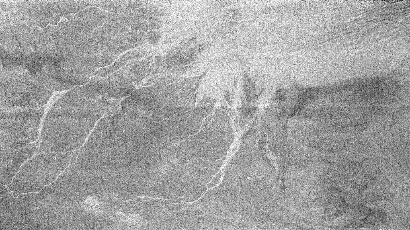 This area, imaged by the Cassini radar system during the spacecraft's third close flyby of Titan on 15 February 2005, is just to the east of the Circus Maximus impact feature (see also Circus Maximus).

The white lines could be channels in which fluid flowed from the slopes of Circus Maximus toward the bright area in the upper right. Areas that appear bright at radar wavelengths may be rough or inclined toward the direction of illumination. The bright area in this image could have received outflows of debris from the channels, making the surface appear radar bright. In this sense, the area may resemble somewhat the rubble-strewn plains in the region where the Huygens probe landed. The fluid carrying the debris was most likely liquid methane, given the extremely cold ambient conditions at the surface of Titan.

The longest channel in the feature is approximately 200 kilometres long. The seams running across the image are an effect of the matching of the different radar beams to assemble the full image.