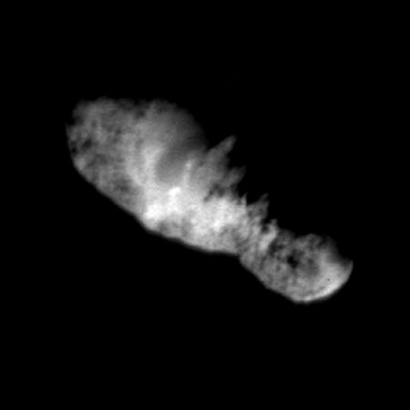 In this highest resolution view of the icy, rocky nucleus of comet Borrelly, (about 45 meters or 150 feet per pixel) a variety of terrains and surface textures, mountains and fault structures, and darkened material are visible over the nucleus's surface. This was the final image of the nucleus of comet Borrelly, taken just 160 seconds before Deep Space 1's closest approach to it. This image shows the 8-km (5-mile) long nucleus about 3417 kilometers (over 2,000 miles) away. Smooth, rolling plains containing brighter regions are present in the middle of the nucleus and seem to be the source of dust jets seen in the coma. The rugged land found at both ends of the nucleus has many high ridges along the jagged line between day and night on the comet. This rough terrain contains very dark patches that appear to be elevated compared to surrounding areas. In some places the dark material accentuates grooves and apparent faults. Stereo analysis shows the smaller end of the nucleus (lower right) is tipped toward the viewer (out of frame). Sunlight is coming from the bottom of the frame. Deep Space 1 completed its primary mission testing ion propulsion and 11 other advanced, high-risk technologies in September 1999. NASA extended the mission, taking advantage of the ion propulsion and other systems to undertake this chancy but exciting, and ultimately successful, encounter with the comet. More information can be found on the Deep Space 1 home page at http://nmp.jpl.nasa.gov/ds1/ . Deep Space 1 was launched in October 1998 as part of NASA's New Millennium Program, which is managed by JPL for NASA's Office of Space Science, Washington, D.C. The California Institute of Technology manages JPL for NASA. Deep Space 1 flew by comet Borrelly and took these measurements with its plasma instruments between 90,000 kilometers (56,000 miles) and 2,000 kilometers (1,200 miles) away. These data show that the flow of ions around the comet's rocky, icy nucleus (the center of the deep V-shaped feature) is not centered on the comet's nucleus as scientists expected before the Borrelly flyby. Ions in the turbulent flow are heated to about 1 million Kelvin (2 million degrees Fahrenheit) causing the bands of ions to appear broad and jagged compared to the solar wind. Image credit: NASA/JPL
View »
22-Jan-2022 11:06 UT