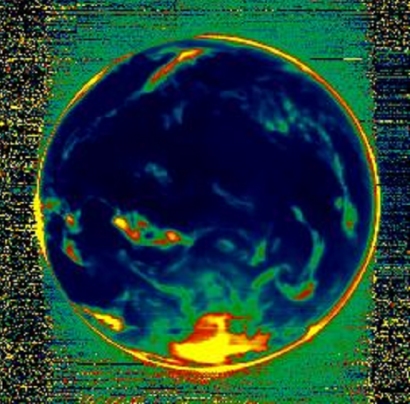 False-colour image of the distribution of CO2 bands in the Earth's atmosphere. The image is a RGB composite obtained by selecting the 4.2 micrometers band for the green and the two relative continua for blue and red. By stretching the image with a Gaussian filter, two regions characterized by a strong CO2 emission band are identified, respectively corresponding to Antarctica and to the antipodes of the sub solar point, where the Earth temperature is very low. The images were taken on 5 March 2005, after Rosetta's closest approach to Earth, by VIRTIS from a distance of 250 000 kilometres and with a resolution of 62 kilometres per pixel.
View »
6-Feb-2023 21:43 UT